The head coach of the Russian women's gymnastics national team and the coach of Olympic champion Aliya Mustafina, Alexander Alexandrov, terminated the contract with the Federation of Gymnastics of Russia and moved to the United States. 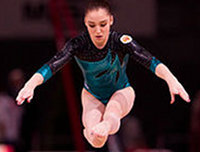 The administration of the Federation believes that Alexandrov was dedicating too much time to Mustafina to other athletes' detriment. The coach of 15 female athletes, all of whom hold champion titles, is currently planning to move to Brazil, where he can lead the national team to train it for the Olympic Games in 2016.

Aliya Fargatovna Mustafina (born 30 September 1994) is a Russian artistic gymnast who is the 2010 World individual all-around champion, the 2012 Olympic uneven bars champion, the 2013 European Champion in the all-around and on the uneven bars. Mustafina was the most decorated gymnast, male or female, at the2012 Summer Olympics, having won four medals including the silver in the team all-around, the bronze in the individual all-around final, the gold in the uneven bars final, and the bronze in the floor final