A sad piece of news came from Paris. David Beckham is retiring from football. The Englishman made the announcement after his current club, PSG, became the champion of France. 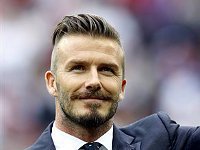 David Beckham has been playing for Paris Saint-Germain since January of this year, and now came the time when he decided to finish his professional career. Previously, it was  reported that he would leave after the World Cup in 2014, to pay last respects to the English  team, which he often led to victory as captain.

Beckham's main team was undoubtedly Manchester United. Throughout ten years of playing in the uniform of the Red Devils, he has played 265 matches and scored 62 goals. Then, due to differences with coach Alex Ferguson, we had to go to Madrid Real. Beckham's list also includes Los Angeles Galaxy of the USA, the Italian Milan and Paris Saint-Germain.

During 22 years of his career, Beckham has won 19 awards in national and international tournaments. In addition, he has became the only English player to have won championships in four countries - in the UK, Spain, the USA and France.

Most likely,  Beckham will deal with his business endeavors now. Together with his wife Victoria, he releases his own line of clothing and perfumes. He is also the face of several fashion houses. The footballer will also be able to spend more time with his family. After all, he is the father of four.

Not that long ago, David Beckham expressed a desire to return to Manchester United and devote a part of his life to working in the administration of the club. So maybe we will see Becks again at Old Trafford - the main stadium of his life.