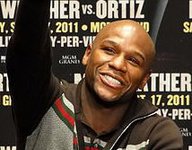 Sports Illustrated magazine has published the list of 50 richest athletes from the United States. The top position is taken by Floyd Mayweather Jr. - a boxer, ca five-division world champion, who has won eight world titles and the Lineal championship in three different weight classes.

For the fights with Victor Ortiz and Miguel Cotto, Mayweather received 85 million dollars. This year, he is going to have at least two more fights - each of them is expected to bring the boxer 90 million.

This year's rating is notable for the fact that golfer Tiger Woods does not take the top of the list for the first time since 2004.

The list was compiled of US-based athletes, or foreigners who play in American leagues.