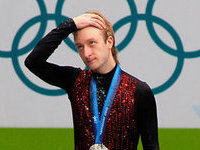 Russian figure skater Evgeni Plushenko is going to sue a Russian sports commentator Andrei Zhurankov of Eurosport 2 TV channel. During a broadcast of a skating competition in Osaka, Zhurankov said on the air that he doubted that Plushenko had had a spine surgery. The buzz about the skater was only a publicity stunt, the commentator added

"I have a strong suspicion that there was no surgery at all, taking into consideration the fact that two days ago, Israeli media said that they could not find the hospital, where Plushenko was staying," the commentator said.

The skater called the comment an insult to both the whole figure skating team and to him personally.

"I do not deserve this attitude for my career and I want to stop that. Such scoundrels should not work on TV," said Plushenko.

Zhurankov stated that he only express a personal opinion based on the information obtained in the media. Plushenko filed the defamation suit on February 11th.

In late January, Evgeni Plushenko withdrew from competitions of the European Championships due to injury. A few days later, it became known that he had an intervertebral disc replaced at an Israeli hospital. Plushenko is a ten-time Russian champion, three-time world champion, the winner of the Olympic Games in Turin and the owner of two silver medals of the Olympics in Salt Lake City and Vancouver.