Evgeni Plushenko, an outstanding figure skater, won the title of the Champion of Russia despite a back injury for the 10th time in his career. "I did everything through the pain," admitted Plushenko. 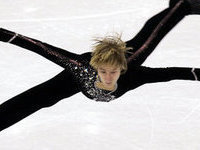 Russia's National Figure Skating Championship started in Sochi on December25th. On Wednesday, Plushenko performed the free program that included a quadruple toe loop, and scored 265.94 points as a result of two programs. Sergei Voronov came second with a score of 254.06 points. The bronze went to Konstantin Menshov who received 228.88 points.

Plushenko admitted after the competition that he did not expect such a high result from himself. He had a surgery on his back a month ago, which affected his physical capabilities. "I started it all over again. I was about to give up, I could not go any further. It was the support from Alexei Mishin, David Avdysh, Vitaly Balygina that helped me," said the skater.

Russia's Championship in Sochi will end on December 29.