Boy adopted from Russia becomes football star in US

Twenty-year-old Oleg Parent, who found a new family five years ago in America, brought the long-awaited victory to the Eagles of the University of North Carolina. Oleg earned the decisive point in the final match with N.C. A & T. 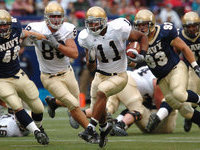 In the U.S., the young man received an opportunity to intensively develop his athletic abilities, which eventually attracted the attention of several universities that offered Oleg athletic scholarship.

The boy was born in St. Petersburg, and lived in an orphanage for more than ten years. He found himself at the orphanage after his biological father killed his mother. In the orphanage, Oleg was doing folk dances. The ensemble of young dancers toured not only in Russia and Europe, but also traveled to the United States. A childless couple paid attention to Oleg at a music festival in the town of Orange. The boy was 13 at the time. When Lou and Deborah started the paperwork to adopt the boy, Oleg's father was released from prison. At first, the man tried not to let his son go to the US.

According to The Orange County Register, the young man feels completely happy. The coach of the Eagles is proud of one of his best kickers.

Thanks to Oleg, his team has finished the season with a victory for the first time since 2007 and took the second place at Mid-Eastern Athletic Conference. The Parents family grow another orphan from Russia - Irina.

"I really want to tell everyone that, even if you have a hard life, there is something good for you in the future. This is what happened to me," says Oleg.