Famous Indian female runner turns out to be a man

The police of the Indian city of Calcutta announced that famous runner Pinki Pramanik was actually a man who was accused of rape, P-Sport said. 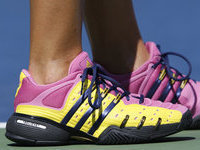 The police sent Pramanik for medical examination to identify the person's gender. Pramanik was released on bail for the time of examination. Five months later, after a series of examinations and tests, the medical board issued its verdict, which became a sensation in India. Pinki Pramanik is a male.

Now the athlete denies all charges in his address, and calls the whole story a conspiracy. According to Komsomolskaya Pravda, the case of Pramanik can turn into an international sports scandal. Should the accusations against the athlete be confirmed, the results of the competition, in which she participated, will be revised, and Pramanik will be deprived of all the awards.

The athlete reached the peak of her fame in 2006, when during the South Asian Games in Colombo, she won gold in the sprint at 400 and 800 meters, as well as in the relay 4 × 400 meters, the Russian News Service said.