On the fourth day of the Games in London, the Russian Paralympic team won 12 medals - four gold, three silver and four bronze ones. In overall medal standings, Russia the retained the fifth place. 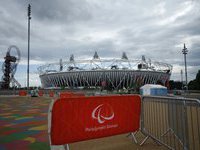 The gold medal was won by athlete Eugene Shvetsov, who overcame 100 meters in 12.08 seconds, which marked a new Paralympic record at this distance. Another track and field athlete - Alexey Labzin - finished first on the 400-meter track with the result of 48.59 seconds, also setting a Paralympic record.

At the end of the fourth day of the Games, the Russian Paralympic athletes have  - 34 awards (12 gold, 13 silver and 9 bronze). Team Russia comes fifth in the team event.