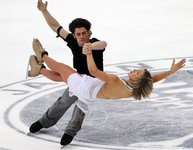 Russian President Dmitry Medvedev wished good luck to all the participants of the 2011 Figure Skating World Championship that kicks of on Monday in the capital of Russia.

Moscow was selected to host the championship last month after Tokyo, which was the original host of the event, was forced to pull out due to the devastating earthquake and tsunami that hit Japan on March 11, reports.

According to the ISU, 196 sportsmen from 44 countries are expected to arrive in Moscow shortly. The championship will draw together nearly all top-ranking figure skaters who performed at the Olympic Games in Vancouver and the worlds in Turin last year.

The event's organizers promise a special kind of ice that will help skaters jump higher without hurting their knees, says.