Ferrari team to unveil their 2011 challenger 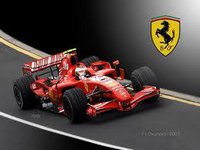 Ferrari will be the first team to unveil their 2011 challenger after the Italian outfit announced they will launch their car on January 28. Earlier this month the team revealed the launch would take place in the final week of January, but team principal Stefano Domenicali confirmed that January 28 is D-Day.

"The car we see at the launch won't be the one we'll see at the first race in Bahrain, we'll see different things," Domenicali said at a news conference, Planet F-1 says.

The team has not won a drivers' title since Domenicali replaced FIA chief Jean Todt as boss at the end of the 2007 season. And it has won neither drivers' nor constructors' championships in the last two years.

Domenicali said: "Our goal this season has got to be both titles."

He added he was sure the team's cause would be aided by Felipe Massa stepping up to the plate after a dismal 2010, The Sun reports.