Spain 's World Cup champions flew home from South Africa on Monday for a massive celebration, including meetings with the Spanish king and prime minister and an open air bus ride through the city's historic center. 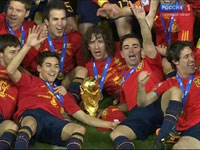 At least several hundred thousand fans were expected to line the streets of the capital to celebrate Spain's first ever World Cup title, less than 12 hours after 300,000 jammed the city center for a raucous party just after the win, USA Today says.

“We’ve been waiting a whole life for this,” said Sergio Busquets, midfielder for the Spanish side, summing up the feelings of all the people in Spain.

The usual 90 minutes of the game finished with a score of 0-0. Following a 10 minute break, the two exhausted team then went into extended time of 15 minutes a side for a further 30-minute mini-match decider. Just as it looked as if there might be a penalty shootout – a final deciding duel that nobody really wanted – Andrés Iniesta scored the only goal of the entire match in the 116th minute, iNews Connect informs.