France legend Zinedine Zidane has denied suggestions he still has a significant influence over the dressing room and has been instructing the current players to challenge coach Raymond Domenech's authority. 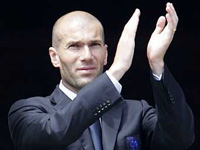 The players returned to training today after they boycotted yesterday's session in protest at striker Nicolas Anelka being sent home after his row with Domenech became public knowledge, Independent reports.

While Zidane labels France's situation "sad," he does believe a victory Tuesday will help it get past its current predicament.

"This team has the possibility to get over this obstacle with this match. Everything can change for them," Zidane said Monday, adding France remains in contention for the title. "I hope they can still get out of this group. There is hope even if everything that has been said to now is the opposite.", The Associated Press informs.