Stanley Cup Finals 2010 Blackhawks Beat Flyers, Chicago Wins 2010 Stanley Cup. The Stanley Cup finals are over, and the Chicago Blackhawks are champions for the first time in 49 years. Although the the Philadelphia Flyers gave them a run for the money Chicago stayed persistent in their quest and it paid off. 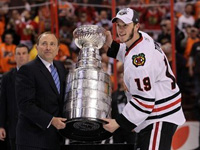 Chicago had an early lead in the series after games 1 and 2. Philadelphia won games 3 and 4, but the Blackhawks stopped their winning streak during game 5. Tonight was Game 6 and the team from the Windy City won for the 4th time during the best of seven series, CNM News Network informs.

Marian Hossa finally got to hoist the cup and Toews handed the cup to him first as soon as he enjoyed the ceremonial presentation.

"Oh my God," said Hossa, who was grinning ear-to-ear on the Wachovia Center ice. "When we go to the Finals again, I was so happy to be in the Finals, but at the same time, it was scary. I'm so glad, what a relief. Third time's the lucky charm. I won it and I got a Stanley Cup and ... what a feeling. This is unbelievable.", Bleacher Report reports.