David Beckham is set to miss this year's World Cup after his surgeon gave a bleak outlook on the midfielder's chances of recovering from a torn Achilles tendon in time to line up in South Africa. 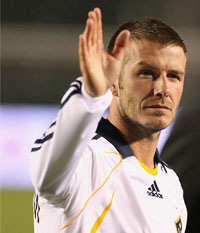 The 34-year-old suffered the injury in AC Milan's 1-0 win over Chievo on Sunday and is scheduled to arrive in Finland at around 11 a.m. British time on Monday for surgery, Reuters informs.

Beckham, who has played 115 times for England, earned $16.5 million from personal sponsorship deals during his first season with the Galaxy. The former Manchester United and Real Madrid star was expected to be in Fabio Capello's England squad as a substitute capable of making an impact with his trademark free kicks and accurate passes.

While most of the world's greatest players prepare to go to South Africa, Beckham and his commercial advisers will be looking on, wondering what they can do to make an impact while he recovers. He receives a $5.5 million base salary from the Galaxy, but his absence from the World Cup could affect his image rights.

Beckham's World Cup record has been is a mixture of highs and lows, and his expected absence is another twist, The Associated Press reported.

However, the Italian coach admits he may be forced to consider other options after seeing Beckham break down and leave Milan's Giuseppe Meazza home on crutches.

"We have to wait for the results of the scan, but it looks like he is out of the World Cup," said the England coach.

"I spoke with him after the game on Sunday night to offer my support, as did Franco Baldini.

"David is a great professional and has worked very hard to be ready for the World Cup, so missing it will be a big blow," according to a report in SkySports.