American and Japanese Skaters are Hard on Heels of Russian Plushenko

Reigning Olympic champion Evgeni Plushenko earned a monster 90.85 points early in the men's short program Tuesday night. Present World champion Evan Lysacek and Japan's Daisuke Takahashi came pretty darn close, setting up the most riveting men's final since the "Battle of the Brians" in 1988 — the last time the Olympics were in Canada. 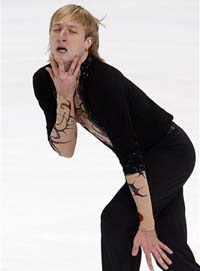 American and Japanese Skaters are Hard on Heels of Russian Plushenko

Lysacek is just .55 points behind Plushenko with Takahashi another .05 back going into Thursday night's free skate. Those margins are so small, the three may as well be tied.

"Easy? That's competition and it is never going to be easy," Plushenko said. "If somebody says today, `I am not nervous' or `I skate easy,' or `I am not tired,' I don't believe him."

This men's competition has been widely anticipated, its field stocked with enough talent to carry two Olympics — four world champions, including Plushenko, who came out of retirement to try to become the first man to win back-to-back gold medals since Dick Button in 1952.

Lambiel is fifth, followed by three-time U.S. champion Johnny Weir and Chan. U.S. champion Jeremy Abbott had another big collapse and is 15th. Joubert's fall was even more shocking and he's 18th.

Plushenko capped one of the most dominant stretches in the sport with the gold medal at the Turin Olympics. With bum knees and nothing more to prove, the Russian retired. But his new wife urged him to return and, at 27, he might just be better than ever.

Lambiel, runner-up to Plushenko in Turin, is in fifth after only doing a double axel and botching his quad. But even with this tough field, don't count the two-time world champion out of the medals hunt. He won the silver at Europeans after being in the same spot after the short program.

"Yes, a gold medal is possible. Nothing is impossible," Lambiel said. "I know my skating and I know myself."

Just 19, Chan is Canada's latest hope to — finally — win a gold medal in men's figure skating. But he cost himself big, stepping out of the landing of his triple axel, slipping during one section of footwork — though he covered it up nicely — and then taking a deduction for finishing after his music.

"This is the Olympics, you can't afford any mistakes and that's a perfect example," Chan said.

The Associated Press news agency  has contributed to the report.