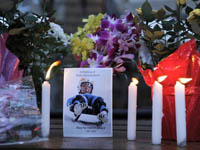 A private service has been held for the Georgian Olympic athlete who met his fate in a luge crash.

Several Georgian athletes and team officials, as well as international and Vancouver organizers, attended the brief service Monday for Nodar Kumaritashvili at a Vancouver funeral home. The brown casket was placed in a gray hearse and was driven away with a police escort of 14 motorcycles.

Later in the day, the body was to be taken on a flight to Germany and then flown to Georgia on Wednesday for burial in his hometown of Bukuriani.

The 21-year-old luger died in a crash during training Friday hours before the opening ceremony.