Chinese Couple Turned Best for the Moment in Figure Skating 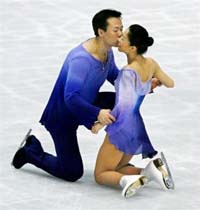 Chinese Couple Turned Best for the Moment in Figure Skating

The Chinese husband-and-wife team, who have come out of retirement to make a fourth attempt at winning the top prize, held almost 14,000 spectators transfixed as they effortlessly glided around the ice to earn a record 76.66 points.

German world champions Aliona Savchenko and Robin Szolkowy put in an emotionally-charged performance to "Send in the Clowns" but their out-of-sync spins probably cost them the lead as they trailed the Chinese by just 0.7 of a point.

Gliding around to the haunting melody of "Who Wants to Live Forever" by rock group Queen, they nailed their eight elements to leave their rivals sweating it out backstage in nervous anticipation.

Shen and Zhao were the first of 20 duos to skate and such was the standard they set, for the next two hours it almost seemed as if the arena had been taken over by a bunch of kindergarten skaters, with scores hovering around the 50 point mark.

It was not until Kavaguti and Smirnov stepped on to the ice that the competition once again started to resemble an Olympic event.

Savchenko and Szolkowy showed up last dressed as clowns, complete with oversized collars and black tear drops painted on their right cheeks. But it was no laughing matter when they realized their crowd-pleasing routine had failed to overtake the Chinese.

Although they gained the psychological edge going into Monday's free skate, the gold medal race remained wide open as only 5.38 points separated the top five -- and one fall or spill could cost any of the leaders dear.