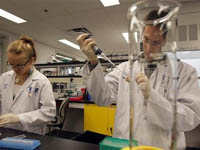 The World Anti-Doping Agency has confirmed more than 30 athletes have been prevented from competing at the Vancouver Olympics for breaking anti-doping rules.

WADA chief John Fahey refused to give details of the athletes involved, saying at a news conference Thursday that the sports and national federations were handling the cases that have emerged in recent months.

He says athletes who cheat at the Vancouver Games are more likely to be caught than in any other Olympics in history.

Fahey says more than 70 athletes were prevented from competing at the Beijing Olympics for violating anti-doping rules in the similar period leading up to those games.