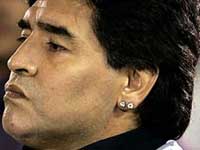 An unidentified woman purchased the earring, which was valued at euro5,500, at the auction in a Bolzano hotel, said Giovanni Lombardo of the Equitalia agency which organized the sale.

Tax police seized the earring in September when the Argentina coach was at a hotel in northern Italy, where he was being treated for weight gain and stress.

Maradona's Italian debts stem from unpaid taxes during the time he played for Napoli from 1984-91, when he helped the club win its only two Serie A titles.

Lombardo called the auction a "drop in the bucket" of Maradona's debts but said it sent a message that even celebrities have to pay taxes.

In 2006, tax police took two Rolex watches from Maradona when he went to a Naples suburb for a news conference and benefit appearance. Authorities also seized the payment Maradona received for an appearance on Italian state TV.

He isn't the only athlete or celebrity to have been targeted by the Italian tax authorities.

In 2000, tenor Luciano Pavarotti agreed to pay nearly 25 billion lire (around US$12 million) to the Italian state after unsuccessfully claiming that the tax haven of Monte Carlo, rather than Italy, was his official residence.