Formula One great Michael Schumacher reportedly agreed to come out of retirement to drive for Mercedes in 2010. 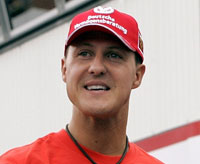 German newspaper Bild said on Wednesday the seven-time champion, who retired in 2006, signed a one-year contract at the team's offices in Brackley, England, on Tuesday. Schumacher will reportedly earn euro7 million ($10 million).

Schumacher, who won five championships for Ferrari, has been heavily linked with a move to the former Brawn GP team, which won last year's drivers' and constructors' titles.

The 40-year-old Schumacher attempted a temporary comeback in August to replace injured Ferrari driver Felipe Massa but a serious neck injury sustained in a motorcycle accident kept him from driving then, USA Today reports.

The Schumacher era came to an end in 2006 after 249 grands prix and numerous records, most notably those titles and 91 race victories.

But Schumacher's natural racing instinct has never deserted him as over the intervening period he has competed in various karting and motorbike events.

It was during a bike test in Spain in February that Schumacher suffered a neck injury which prevented him from making a return to F1 with Ferrari in August, The Press Association informs.