Two-time Grand Slam champion Amelie Mauresmo retired from tennis Thursday, saying she no longer had a burning desire for competition. 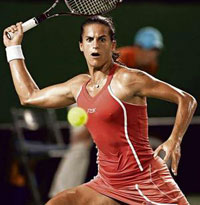 The 30-year-old Frenchwoman is a former No. 1 player who finished this season at No. 21.

"I don't want to train anymore," Mauresmo said after shedding tears about the decision. "I had to make a decision, which became evident in the last few months and weeks. When you grew older, it's more difficult to stay at the top."

Mauresmo, who won both of her Grand Slam titles in 2006, at the Australian Open and Wimbledon, said she was happy to leave on a good note after winning her 25th singles title — her first in almost two years — in Paris this season. She also had seven wins over Top 10 players in her final year.

"It's a bit sad, but this is the right decision," Mauresmo said. "I was lucky enough to have an exceptional career and to experience very strong feelings on the court," The Associated Press reports.

Mauresmo last appeared on court on September 2 when she lost in the second round of the US Open against 39th-ranked Canadian Aleksandra Wozniak in straight sets.

She announced the following month she would not play again this season citing a slump in her motivation to keep competing at the top level.

Her final title came appropriately enough at the Paris Open earlier this year when she defeated Elena Dementieva.

She first appeared aged just 16 at Roland-Garros after receiving a wild card entry, then the following year she was crowned junior world champion.

Her first major breakthrough came with her run to the Australian Open final in January 1999, when she lost in straight sets to Martina Hingis, AFP reports.

According Sky News, she said: "It was becoming tough mentally. I simply did not want to go training any more.

"My tennis life lasted 25 years - there were extraordinary things and tough moments.

"I had three main goals in my career; becoming world number one, claiming a grand slam title and a Fed Cup. I achieved all of them.

"It's a bit sad, but this is the right decision.

"I was lucky enough to have an exceptional career and to experience very strong feelings on the court."