Michael Vick Makes Debut With Eagles in Win Over Jags

Michael Vick was showered with amore Thursday night in his Philadelphia Eagles debut. Not beer and batteries from drunken louts a la former Dallas coach Jimmy Johnson. Not stuffed animals, as one anti-Vick faction had contemplated. 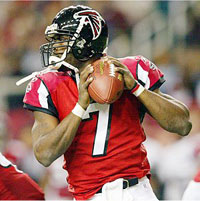 Michael Vick Makes Debut With Eagles in Win Over Jags

Eagles fans — a surly lot that once pelted Santa Claus with snowballs — gave Vick a Rocky Balboa-type welcome whenever he played in a 33-32 preseason win against Jacksonville. The pregame protests expected because of Vick's prior involvement in dog fighting fizzled as well.

"I didn't think it would be that positive," Vick said of the crowd reaction during his postgame news conference. "I was very pleased," FOXSports.com informs.

"I wanted to get him somewhere between five and 10 snaps," Eagles coach Andy Reid said following Thursday's preseason game. "We accomplished what we wanted to do."

Vick played six snaps, all during the first half -- five snaps at quarterback, one at wide receiver. While Vick's passing stats looked stellar -- 4-for-4, 19 yards -- two of those completions were simple shotgun shovel tosses to running back LeSean McCoy.

This was a test drive, a chance for Vick to get his feet wet during the Eagles' 33-32 victory over the Jaguars at Lincoln Financial Field. Reid intentionally did not use Vick in the red zone, and he certainly has more in store for Vick. However, we will not see it before the regular season, or before Vick is fully reinstated, SportingNews.com informs.

Vick, who was on the field for a total of six plays - five in the first quarter and one in the second - did not play in the final 12 minutes of the second period or at all in the second half. When he plays in the regular season, he likely will be used exclusively at QB in the Wildcat formation. He had some conventional snaps last night as well. As expected, he looked rusty and tentative, although Vick said it felt like he was never gone.

"It's almost like riding a bike," he said. "You never forget how to do it. I enjoyed myself," reports New York Daily News.