Blake Griffin to stay with Oklahoma Sooners for another season

An American basketball player, Blake Griffin, is planning to stay away from entry into the NBA draft for another season. 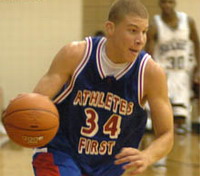 Blake Griffin to stay with Oklahoma Sooners for another season

Oklahoma Sooners’ forward was named a McDonald's All-American in 2007. At the McDonald's All-American game in Lexington, Kentucky he won the slam dunk contest. During his high school tenure he led Oklahoma Christian School to four state championships. After having a successful first half of the season, Blake suffered a sprained knee in the 2007-2008 season while being named to the First Team All Big 12 and also the First Team All Rookie Big 12.

Griffin was believed to be an early first-round draft pick if he performed well in workouts and interviews leading up to the draft. But the boy’s choice fell on the sophomore season.