Brett Favre discourses on his return to Green Bay

Brett Favre has no plans to resume playing but admits that it’ll be very hard to decide if Green Bay ask him back under the right circumstances. 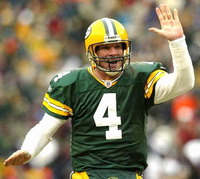 Brett Favre discourses on his return to Green Bay

On March 4, 2008, Favre formally announced his retirement. Favre's agent, Bus Cook, stated "Nobody pushed Brett Favre out the door but then nobody encouraged him not to go out that door either. I don't think he had a lot of encouragement to stay, but nobody told him to leave either." Cook also believed that Favre had not gotten the impression from the Packers that they wanted him back.

At his press conference, Favre openly wept about leaving the NFL. He stated that his decision, regardless of what was being said in the media, had nothing to do with what the Packers did or didn't do. He said, seemingly contradictory to Cook's statements, that his decision to retire was based on the fact that he didn't want to play anymore. He said during the conference, "I know I can play, but I don't think I want to. And that's really what it comes down to." He will be eligible for the Pro Football Hall of Fame in 2013.