A sore elbow prevented Tom Gorzelanny from participating in a scheduled start in the Pirates' exhibition opener against the Philadelphia Phillies on Thursday. 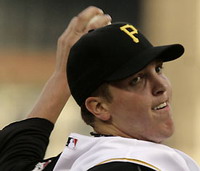 A Major League Baseball pitcher reassured the fans that the injury was not serious.

Gorzelanny spent most of the 2005 season with the Double-A Altoona Curve, but made his Major League debut with the Pirates on September 20, 2005. At the beginning of the 2006 season, he was optioned to the Triple-A Indianapolis Indians. On June 29, 2006, the Pirates called Gorzelanny up to replace Oliver Perez in the pitching rotation. He made his season debut on July 1 against the Detroit Tigers.

On July 1, 2007, Gorzelanny was selected as one of the five players in the National League that would be chosen from a final fan vote for the last spot on the NL roster for the 2007 MLB All-Star Game.

Gorzelanny was replaced by left-hander Phil Dumatrait for the game.