Chad Johnson, an American football wide receiver for the Cincinnati Bengals of the National Football League, expressed more criticism of his team. 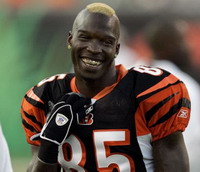 On January 13, 2008, Johnson was a guest on ESPN's Mike & Mike radio show. During the interview, Johnson enlarged upon the way the media and team treated him during the 2007 season, saying, "I was labeled selfish and a cancer, and it hurt...Fingers were pointed at me this year. If the team and the organization wants to further itself (make the playoffs), I think you need to get rid of the problem...It hurt me. To do me that way and not to have my back. Things were said, and nobody came to my defense." Nearly a week prior, quarterback Carson Palmer was on the show, saying that Johnson deserved a contract extension. However, head coach Marvin Lewis commented on the issue by saying that the Bengals will not be trading Johnson. "He is a Cincinnati Bengal for quite a while." Lewis said.

On February 4th, Chad Johnson's agent, Drew Rosenhaus, stated that Johnson will not sit out the 2008 season and will play, but would not say whether it will still be with Cincinnati or not. ESPN's Chris Mortensen reported that Johnson felt betrayed by coach, Marvin Lewis, and was privately threatening to sit out the 2008 season. Johnson himself told Fox Sports that he was undermined by a "prominent source" within the Bengals organization last season.

On February 4, 2008, Johnson was selected as the replacement for Patriots' receiver Randy Moss in the 2008 Pro Bowl. The selection marked his fifth consecutive Pro Bowl selection. Johnson and teammate T.J. Houshmandzadeh will both be on the starting roster, marking the first time a pair of Bengals receivers have made the Pro Bowl in the same year.

During the first practice of the 2008 Pro Bowl, on February 7, Chad Johnson conducted an interview with an NFL Network reporter, but declined interviews with national media sources. An NFL public relations representatives attempted to stop Johnson from walking away at one point, due to the rule that players must allow to be interviewed during the Pro Bowl, but he was brushed aside by Johnson. It is reported that Johnson faces a possible fine.