On February 8, 2008, LSU fired John Brady, but will allow him to coach the final game against Tennessee on February 9. LSU announced his dismissal at a press conference on February 8th at 1:00 p.m. CST. His assistant coach, Butch Pierre, will take over for the remainder of the season. 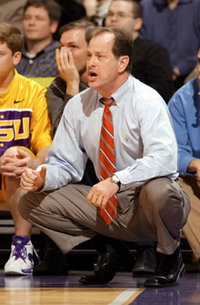 The basketball coach hadn’t have much success since leading the Tigers to an unlikely Final Four run in the 2006 NCAA Tournament, the fourth men's Final Four in LSU history.

Brady's team entered the 2005-06 season unranked, but coming off a solid season in which they went 20-10 and made the NCAA Tournament. Led by Glen "Big Baby" Davis and Tyrus Thomas, the Tigers won their first outright SEC regular season championship since 1985, and earned a #4 seed in the NCAA Tournament. After wins over Iona and Texas A&M, LSU defeated the #1 seed Duke and #2 seed Texas to make it to their first Final Four since 1986. Set at the RCA Dome in Indianapolis, Indiana, the 2006 Final Four was the first since 1980 to feature no #1 seeds (LSU, #2 UCLA, #3 Florida and #11 George Mason). Facing the #2 seed Bruins in the national semifinals, the Tigers were unable to solve UCLA's defense, losing 59-45, dropping LSU to 0-6 all-time in the men's Final Four (and 0-10 in all Final Four games, including an 0-4 mark in the women's Final Four). Despite the loss, the 2005-06 season will be remembered as one of the most successful in LSU men's basketball history. John Brady was fired in the middle of his 11th season as LSU's head basketball coach and just two seasons after the Tigers' latest Final Four appearance.

In 10 seasons at LSU, Brady has compiled a 184-126 record, including two SEC Western division titles and four NCAA tournament appearances.