A center fielder in Major League Baseball, Curtis Granderson, has signed a 5-year contract with the Detroit Tigers. 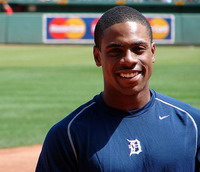 Granderson became the Tigers' starting center fielder for the 2006 season after beating out then teammate Nook Logan for the position during spring training. He was not listed on the 2007 All-Star Game ballot, due to the Tigers' decision to put Gary Sheffield as an outfielder on the ballot.

Granderson was named the American League Player of the Week on July 16, 2007, the first time he had won the award. During the week ending July 15, 2007, Granderson hit .500 (8-16) with two doubles, a triple, and a home run. Granderson slugged .938, drove in two runs, scored seven runs, and had fifteen total bases during Detroit 's four-game series at Seattle.

On August 7, 2007, Granderson became only the second player in franchise history to have at least 30 doubles, 15 triples, 15 home runs, and 10 stolen bases in a single season when he hit a double in a game against the Tampa Bay Devil Rays. The other Tiger to accomplish this feat was Charlie Gehringer in 1930.

The one criticism of Granderson in his young career has been his propensity to strike out a lot at the plate. However, he has improved in this area. After leading the American League with 174 whiffs in 2006, he dropped to seventh in the AL in 2007 (141 strikeouts) in roughly the same number of plate appearances.