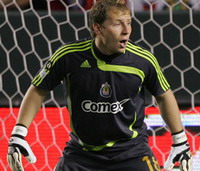 Ever since he appeared in the Milk Cup in 2003, Guzan has found himself linked with a host of top European clubs, and his superb performances in the 2007 MLS Season (in which he won the Goalkeeper of the Year award), as well as with the U.S. National Team have made interest even stronger.

On January 2008 Guzan was training with Scottish Premier League Champions Celtic with a view to agreeing on a permanent contract. Villa have recently submitted a bid of $4 million, doubling a previous offer by Celtic. But unfortunately Guzan’s transfer to Villa is impossible now due to a rejected work permission.

A 23-year-old goalkeeper will stay with C.D. Chivas USA of Major League Soccer and take part in next Wednesday's exhibition game against Mexico in Houston.