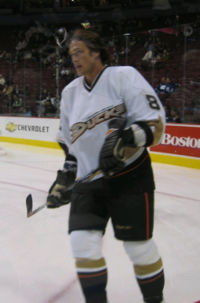 A free agent has signed a deal with the team to play for the rest of the season. No further information about contract details is available.

For Anaheim Ducks it’s the second return: on December 16, 2007 Niedermayer made his return to Anaheim, playing his first game back with the team. This time on January 28, 2008, Teemu Selanne signed a 1 year contract with the Ducks and will finish out the 07/08 season with them.

The Ducks are going to defeat the Ottawa Senators in 5 games in the Stanley Cup Finals, giving the team and Selänne their first Stanley Cup championship.

Selänne dominated the statistics sheet in the 2005-06 NHL season registering 40 goals and 50 assists for 90 points in 80 games.

He completed the 2006-2007 NHL regular season with 48 goals (third best in the league) and became the first player in NHL history over the age of 35 to record consecutive seasons with 40-plus goals. He also led the NHL with 25 power-play goals, tying the Anaheim club record that he set in 1998-1999. His 10 game-winning goals tied him for the most in that category this season.

Selänne recorded his 1,000th NHL point on January 30, 2006 with his second goal against the Los Angeles Kings, becoming the 70th player, as well as the seventh European player, to achieve the milestone.