A thoroughbred racetrack in Arcadia, California, had to cancel racing Thursday because of heavy rainfall. 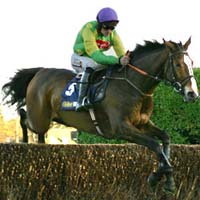 Santa Anita authorities wanted to replace this surface with natural dirt. But a nationwide search brought no results as it turned out impossible to find 20,000 tons of dirt in such a short time.

Now the authorities try to produce a stabilizing binder in order not to remove or displace the track.