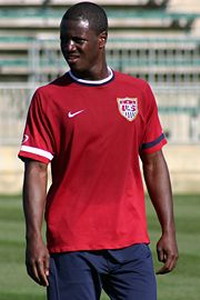 Previously Johnson played for Kansas City Wizards but left the U.S. National Team camp in California on January 17, 2008. He completed a transfer to Fulham on January 23, 2008, signing a contract extending until the summer of 2011.

Johnson has become the 5th American in the team, including Kasey Keller, Carlos Bocanegra, Clint Dempsey and Brian McBride.