Mike Holmgren stays with Seattle Seahawks for another season

One of the best coaches in the NFL and a National Football League American football coach, Mike Holmgren, decided to stay with the Seattle Seahawks for another (2008) season. 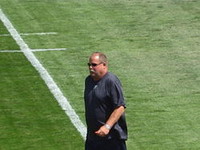 Mike Holmgren stays with Seattle Seahawks for another season

The team has scheduled a 5 p.m. ET news conference to announce Holmgren's decision.

Mike Holmgren resigned from the Green Bay Packers after the 1998 season to accept an eight year head coach contract offered by the Seattle Seahawks. Originally, Holmgren was the Executive Vice President/General Manager and Head Coach of the Seahawks. Following the 2002 season, Holmgren relinquished his duties as general manager to focus exclusively on coaching.

Holmgren's (and the Seahawks') best season to date was 2005. The team posted the best regular-season 13-3 (81.3%) record in franchise history, set a team record 11 consecutive wins, and won their first playoff game since 1984. Holmgren also molded former Green Bay backup quarterback Matt Hasselbeck into a Pro Bowl and Super Bowl quarterback in the 2005 NFL season (much as he did with Favre in the 90s), and coached Shaun Alexander to the NFL's MVP, a 2005 rushing title, and an NFL record 28 touchdowns in a single season.

With the 2005 NFC Championship win, Mike Holmgren became the fifth member of a small coaching fraternity that has taken two different NFL teams to the Super Bowl, joining Bill Parcells, Dan Reeves, Don Shula, and Dick Vermeil. Had the Seahawks won Super Bowl XL, he would have become the first head coach in NFL history to win a Super Bowl with two different teams, but Seattle fell short, losing 21-10 to the Pittsburgh Steelers.

It’s Holmgren’s habit to take a week after each season and try to reflect on it and decide if he wants to coach. This year was the same. In 2006, he signed a two-year extension that runs through the 2008 season.