Two World Series rings and a shiny new Gold Glove certainly command a raise -- both Kevin Youkilis and the Red Sox can agree on that much. 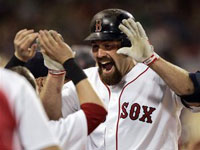 The Red Sox exchanged salary figures with Youkilis and reliever Kyle Snyder on Friday, while also agreeing with reliever Javier Lopez on a new one-year deal. Youkilis is asking for $3.7 million through arbitration -- which would represent a healthy raise over the $424,500 he made last season -- while the Red Sox have countered with an offer of $2.5 million, mlb.mlb.com reports.

Kevin Edmund Youkilis nicknamed "Youk" and "The Greek God of Walks," is an American Major League Baseball player who is known for his on base percentage greatly exceeding his batting average. Youkilis is a Gold Glove award winning first baseman and right-handed batter who plays for the Boston Red Sox. Although his family name is derived from the Greek culture, Youkilis is Jewish, of Romanian descent.

Prior to 2006, when he took over as the team's first baseman, he primarily played third base. He has also played second base and left field. The move paid off, as Youkilis was the only major leaguer with a 1.000 fielding average in 2007.