Georgia Frontiere, the St. Louis native who became a hometown hero when she brought the NFL's Rams from Los Angeles in 1995, died Friday. She was 80. 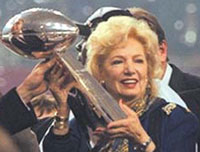 Frontiere had been hospitalized for breast cancer for several months, the Rams said in a statement posted on their Web site, the AP reports.

Frontiere inherited ownership of the team, then based in Anaheim, California, in 1979, after the death of her husband. Rosenbloom, an avid ocean swimmer, died mysteriously in the Atlantic. Although no evidence of foul play was uncovered, it is rumored that Rosenbloom, a high stakes gambler, was killed over failure to repay debts.

The PBS series Frontline investigated the story and reported mafia involvement. Rosenbloom left the team to Frontiere in his will, but it is speculated that this was only for tax purposes and that Rosenbloom wanted his son Steven to assume control. However, Frontiere quickly dismissed her stepson from the organization and assumed full control.

A native of St. Louis, Missouri, Frontiere moved the Rams to St. Louis, which was a financially risky proposition initially but soon proved to be a goldmine as the city of St. Louis provided a publicly funded stadium for $260 million, and more than $22 million was guaranteed in annual luxury suite and ticket revenues. In the 1999 season, under head coach Dick Vermeil and MVP quarterback Kurt Warner beat the Tennessee Titans in Super Bowl XXXIV and Georgia was on the platform hugging Vermeil when the Vince Lombardi Trophy was awarded to the Rams as the winners.