Chicago Cubs, a professional baseball team, the champion of the Central Division of Major League Baseball’s National League signed a one year contract with Jon Lieber. 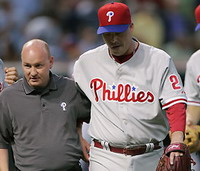 The team paid $3.5 million and promised around $4 million in incentives for Lieber’s future play.

In addition to the leading players and just bought right-handed pitcher Ryan Meyers it will improve the team’s pitching. The Cubs consider Jon an experienced and really good competitor, a good guy in the clubhouse and well-respected.

Lieber uses a tough slider and an effective changeup to go with his low 90s fastball. He led the National League in shutouts for three consecutive years (1999-2001). His most productive season came in 2001, when he led the league in games started (35) and innings (251), posted a career-high 20 victories, was selected an All-Star, and finished 4th in the Cy Young Award vote. In the same year, he one-hit the Cincinnati Reds, 3-0, ending the team's NL-record streak of 208 games in a row without being shut out. He missed the entire 2003 season after undergoing Tommy John surgery in 2002. Lieber signed a two-year rehabilitation contract with the Yankees following the 2002 season. After recovering from the surgery, Lieber rewarded the Yankees' investment in 2004 by winning 14 games (tied for the team lead) and becoming the team's most consistent pitcher down the stretch.

Before the 2005 season, Lieber signed as a free agent with the Phillies. In 2005, Lieber led the team with 17 wins. His tenure with the Phillies ended early in the 2007 season after an ankle injury required season-ending surgery.

Lieber will compete with Ryan Dempster for the No. 5 spot, with Sean Gallagher and Sean Marshall on the periphery.