The former General Manager of the St. Louis Cardinals, Walt Jocketty, was hired as a Special Adviser to the owner of the Cincinnati Reds on January 11,2008. Jocketty will advise and assist the team in their baseball operations which include the front office, personnel, scouting, minor and international operations and training and medical services. 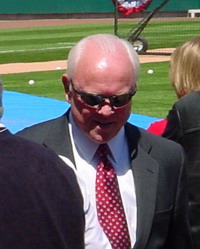 His great experience and success were the main reasons for the team to hire Jocketty. In its turn Jocketty is ready to cooperate and create another successful team.