A former Costa Rican-American soccer defender finally changed his interim title in Chicago Fire into the permanent. Denis Hamlett was finally appointed a head coach of the team. 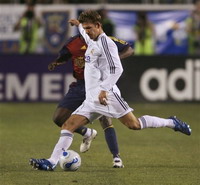 Following his retirement from professional play in 1997, Hamlett attained his coaching license from U.S. Soccer. In 1998, Hamlett joined the coaching staff of the Chicago Fire.

He then served as an assistant coach during the U.S. Project-40 squad's visit to Portugal .

"I greatly appreciate the organization giving me the opportunity to be head coach of the Fire, and I am thrilled to continue to be part of this team as it enters a new and exciting chapter in Fire history," Hamlett said in a statement.

The manager of the team highlighted talents of the new coach and expressed his hope about future gains and awards under new circumstances.