The Cubs resumed its talks with Baltimore Orioles about Brian Roberts, a switch hitting second baseman. He has spent his entire professional career with the Orioles organization and made his Major League debut in 2001. 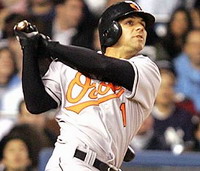 The question raises: How much is the Cubs going to offer for the player? The was a rumor that the Cubs is going to sell pitchers Sean Gallagher, Sean Marshall and shortstop Ronny Cedeno to the Orioles for Roberts, but the team refuted the report.

The Orioles understands that Roberts is a valuable player, that's why it’s waiting for the sweeter offer than the one made at the winter meetings in Nashville .

Roberts will provide the Cubs with more speed at the top of the order and give Lou Piniella's team another veteran second-base option besides Mark DeRosa.