Ricky Hatton against Floyd Mayweather - the show that earns attention all over the world. 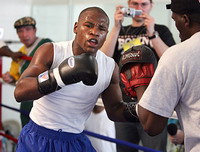 That's how big the WBC welterweight title fight is back home in Britain.

Hatton, unbeaten in 43 fights and fighting one of the current greats, has a huge following back home because of his toe-to-toe style and ferocious body shots. He scored a memorable victory over another great, Kostya Tszyu, to capture the IBF light-welterweight title in June 2005, when the Russian-born Australian didn't come out for the final round.

Now he takes on a champion that is unbeaten in 38 contests and gained a split decision over Oscar De La Hoya in May in boxing's biggest fight in years. There's even talk in the British press about Hatton taking on De La Hoya.

Sky Sports, which is showing the fight for 14.95 pounds (US$31), has been plugging it daily for six weeks. So much so that it barely mentioned Joe Calzaghe's thrilling unification victory over Mikkel Kessler on Nov. 3 until it was all over, largely because it was on a rival channel.

Sky declined to estimate the pay-per-view audience is has so far and said it won't have figures until at least five weeks after the fight, when all the satellite and cable customers have paid up.

With Saturday's fight looming, interviews with Hatton and Mayweather are repeated on Sky's sports news channel hourly, especially the footage of their head-to-head confrontation at Wednesday's news conference.

The two fighters were invited to stand face-to-face for the cameras and remained there, staring menacingly into each others eyes, for two minutes. When Mayweather pushed his chest into Hatton, the British fighter pushed back, also without using his hands.

"Don't touch me," Mayweather said as they were pulled away from each other and Hatton ran a finger across his throat in a pretend death threat.

It's that sort of confrontation that has made this fight so popular, especially in Britain.

Coverage on other TV channels and in the newspapers has grown steadily in the past few days and even last week's Boxing News, the respected British-based weekly magazine devoted to the sport, had a 12-page pullout on the fight eight days in advance.

Bookmakers say that Hatton, who is the 13-8 underdog, is the heaviest backed British individual ever. William Hill expects more than 10 million pounds (US$20.7 million) to be bet on the fight.

"We are having to raise our estimate of the amount of money being bet on this fight every day, and the vast majority of it is for Hatton," said Sharpe, whose company rates Mayweather a 1-2 shot. "Although we are happy to take the punters on by offering Hatton at 13-8 we are being so well accommodated that it cannot last much longer."

More than 4,000 British fans are scheduled to fly out to Las Vegas, and Hatton also will have plenty more American-based supporters at ringside.

Hatton even believes he is more popular over there. He said was cheered when he arrived at his hotel in Las Vegas on Tuesday while Mayweather was booed.

"If I got a reception like that in Manchester," the British fighter said, "I'd hang my head in shame."