Roy Hodgson quits as Finland coach after putting the team on the brink of qualifying for the European Championship. 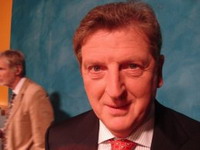 Hodgson said Friday he will take a job with Inter Milan in the Serie A, but did not specify what his position will be. Hodgson coached the Italian side between 1995-97.

The Finnish Football Association said it had wanted to keep the Englishman as coach for the qualifying campaign for the 2010 World Cup, and that Hodgson will assist them in finding a successor.

"He has done a great job," association president Pekka Hamalainen said. "We understand that other parties have been interested in his services, and we wish him the best for the future."

The Englishman joined Finland in January 2006, and led the team to a surprisingly strong challenge for a spot in Euro 2004. The Finns would have reached the finals if they beat Portugal away in the final qualifier, but could not break a scoreless tie. Instead, Portugal and Poland advanced from the group, while Finland and Serbia tied for third.

Hodgson's biggest achievement was to organize the Finns' defensive game. Finland, which has never qualified for the finals of a major tournament, allowed only seven goals in 14 games - the fewest of any team in the group.

Hodgson has been linked by media to several possible new positions, including managing England.

He led Switzerland in the 1994 World Cup and into Euro 96. He has won titles in Sweden with Halmstad and Malmo, and in Denmark with FC Copenhagen.