Harry Redknapp's arrest this week as a part of an investigation into soccer corruption has ended his chances of becoming England coach. 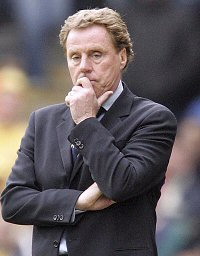 Redknapp, who was linked with the post after Portsmouth's strong performances over the past year, was questioned by police on Wednesday.

He denied all involvement at a news conference the following day, but told BBC Radio on Friday that he no longer thought he was a candidate to succeed Steve McClaren, who was fired last week when England failed to qualify for next year's European Championship.

"I'm not saying I would have got the job, but ... all this rubbish and disgusting treatment I've had has changed it all really," Redknapp said. "I'm not saying I was chasing the job. I love the job I do here, so it wasn't a case of me wanting to leave here.

"But it was nice that people were talking about how well I'd done and how good I am at my job."

Redknapp returned to Portsmouth for a second spell in December 2005 and saved the club from relegation from the Premier League. He then led it to ninth place last season for its highest finish in 52 years, and has guided it to seventh place this season.