DaMarcus Beasley to go for operation after injuring knee

DaMarcus Beasley, Rangers midfielder, will have to undergo surgery after injuring knee ligaments in the Champions League. Beasley is unlikely to be fit for the United States' next game. 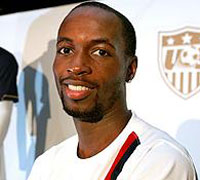 DaMarcus Beasley to go for operation after injuring knee

The 25-year-old American international was hurt in a collision with Stuttgart goalkeeper Raphael Schafer in Rangers' 3-2 defeat Tuesday. He was taken off the field on a stretcher.

"Beasley will be out for quite a lengthy period," Rangers manager Walter Smith said Friday. "He has to go for an operation, which he will go to America for. We will have a better idea after that operation, but it will be months before he is back. How many, I'm not quite sure."

Beasley, who has scored four goals in 19 games for Rangers, joined in June from Dutch club PSV Eindhoven. He spent last season on loan at Premier League team Manchester City.

"It's a bigger blow for him in the sense that no player likes to be out for what could be a considerable length of time," Smith said. "For us, he was settling in and he was starting to do well. He has a bit of pace in the wider areas on the pitch, so we will miss him."

Beasley is unlikely to be fit for the United States' next game, a friendly against Sweden on Jan. 19 at Carson, California.