The German tennis federation found no proof of Tommy Haas having been poisoned before a Davis Cup match against Russia. 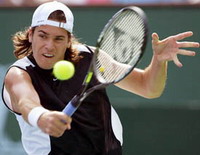 Haas was forced out of his match against Mikhail Youzhny with a suspected stomach virus as Russia won both reverse singles matches in Moscow on Sept. 23 to beat Germany 3-2 and reach the Davis Cup final.

"We do not speculate but the German federation will act if there is any proof," federation president Georg von Waldenfels told The Associated Press. "I think one has to take these things seriously. There are facts and rumors, but there is still a lack of proof now."

"He said as an aside, that it was bitter that Tommy Haas was poisoned," said Waske, who answered by saying that Haas had a virus. "Thereupon he said: No, they poisoned him."

The 13th-ranked Haas, who pulled out of a tournament in Lyon in October, is still feeling weak now.

"It's possible all this hangs together and that was a long-term consequence," Haas said. "But if anybody can prove anything now, I really don't know."

The German federation will wait for the results of Haas' tests in the United States before acting, citing Waske's refusal to identify the Russian player agent as hindering the investigation.

"For that reason, if and by whom Tommy Haas was supposed to be poisoned, can't be determined and is pure speculation," the federation said in a statement.

The International Tennis Federation said the issue might be discussed at a board meeting in Madrid, Spain, and that an investigation would take place.

However, the Russian tennis federation has already dismissed the matter.

"The best comments were given by the German tennis federation - it is ravings, there's nothing to comment on," federation vice president Alexei Selivanenko said.

Haas said he was scared at how sick he got before his match against Youzhny and had to call the team doctor three times during the night.

"I was never so miserable in my life. When I think about how bad I felt, then I can imagine it," Haas told German news agency dpa, referring to being poisoned. "I've been feeling weak for weeks."

Germany team doctor Erich Rembeck ran blood tests on Haas, but said they were only for a virus since there was no reason to suspect anything else.

Rembeck didn't rule out Haas' food or drink being tampered with. He said the German staff drew up meal plans, but the kitchen staff at the hotel prepared what ended up on the players' plates.

"Speaking of the facts, there is at the moment no evidence for poisoning," Kuehnen said.