Pele believes American fans were misled about what David Beckham could bring to Major League Soccer. 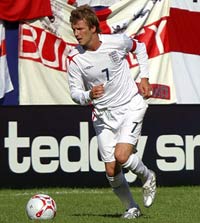 Amid great fanfare, the former England captain was presented by the Los Angeles Galaxy in July, but his greatest impact has been on ticket sales and merchandise.

Pele believes Beckham's introduction was "very, very bad" as it raised expectations about what the former Manchester United and Real Madrid midfielder could produce on the pitch.

"They announced him as a scorer of goals," Pele told The Associated Press. "He isn't a goal scorer. That was a mistake."

After playing an exhibition match in Vancouver, British Columbia, on Wednesday night, Beckham said "everybody in the world knows I'm not a goal scorer."

"The Galaxy wouldn't have come out and said that," Beckham said. "Like I said, everyone has got their own opinions. Pele is a great player and a great ambassador for the game."

The 32-year-old Beckham is more adept at delivering crosses. In five league games, Beckham scored one goal - from a trademark free kick - before being ruled out with a knee injury for seven weeks.

"Beckham wants to be the star and that's his big problem," Pele said, referring to Beckham's injuries. "It is not easy to play in American soccer, because it is very tough. The mentality is English mentality."

Pele, a three-time World Cup-winning Brazil striker, generated huge publicity for the North America Soccer League when he made his debut for the New York Cosmos in 1975.

"The first year was very tough for me because Cosmos was a young team," Pele said. "But later on we had Franz Beckenbauer, Giorgio Chinaglia and Carlos Alberto. We set up a good team."

More than 75,000 New York fans saw Pele's final match two years later, when he played the first half with the Cosmos and the second half with his former Brazilian team, Santos.

But soccer then struggled to compete with more established American sports or generate publicity - until Beckham's arrival.

Pele believes MLS players' salaries need to be raised to the level of American football or baseball players. He also wants the lifting of restrictions on player movements, which are designed to stop wealthy teams from amassing the best players.

"This was one of the mistakes. They have to give freedom to the owners of the teams to buy the players and (chose) which players they want to put (out)," Pele said. "The big mistake in the league now is to control the level of the teams. If they opened this up, it would be much better."