Shoaib Malik, Pakistan captain, promised to play "exciting and competitive" cricket during a tour of India. He said the Pakistan team was determined to repeat its one-day series triumph during the last tour of India in 2005. 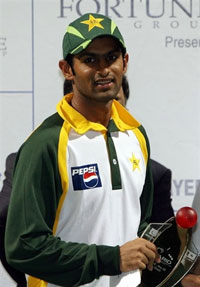 "Playing India is always exciting, we all love to play India," Malik told reporters after the Pakistan team arrived in India for the tour comprising five limited-overs internationals and three tests matches.

"We're eager to play exciting and competitive cricket," said Malik, whose team was escorted out of New Delhi's international airport by security staff that blocked a crowd of fans from approaching the players.

Pakistan's coach, former Australian test player Geoff Lawson, said he was anxious to experience the atmosphere of an India-Pakistan series, which he termed the biggest rivalry in world cricket.

"I think an India-Pakistan contest is bigger than the Ashes," said Lawson. "I understand a fair bit what happens here when India plays Pakistan. It's more than a cricket contest, it becomes a national rivalry."

The Pakistan team is without paceman Mohammad Asif who dropped out of the limtied-overs internationals due to an elbow injury just before the team embarked on the tour.

"Asif's a quality player. We'll always miss him, but we have quality replacements," said Lawson.

Lawson said the Pakistan team had learnt a lot from its mistakes during the recent series against South Africa that Graeme Smith's team won 3-2.

Lawson said he was not bothered by that fact that India has been dubbed the stronger side for the upcoming one-day series that begins Nov. 5 in the northeastern city of Gauhati.

"Whether we start as the favorites or not, what matters is how players handle the pressure," he said. "There's very little difference between the two sides."

"The recent matches against South Africa were very close contests, showing us that small mistakes can prove expensive," said Malik.

Pakistan will open the tour with a one-day practice match against a Delhi XI on Friday.

The Delhi team will be led by test opener Gautam Gambhir, but will miss star batsman Virender Sehwag, whose father died this week.

The Delhi XI will also be without the injured pace pair of Ashish Nehra and Ishant Sharma. Nehra has pulled out of the match due to an ankle problem, while Sharma is recuperating from a shoulder injury.

Meanwhile, the Indian cricket board said it would ask its government to loosen a restriction that will see just 250 tickets per match sold to Pakistani fans.

Niranjan Shah, secretary of the Board of Control for Cricket in India, said Thursday that the allocation was too small and that the board would ask for more tickets for traveling Pakistani fans.

"Our president will also meet with the (Indian) foreign minister," Shah said.