Ex-executive of the U.S. branch of a Japanese company was forced to visit a brothel during a corporate party. The employee was fired after he complained. 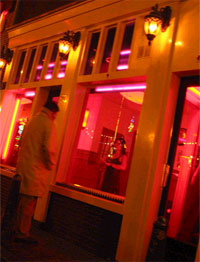 The former creative director of the U.S. arm of Japan's largest advertising agency sued the company Thursday, saying he was pressured to visit a brothel and engage in other sexually explicit activities on company outings and then was fired after he complained.

In a lawsuit seeking unspecified damages filed in U.S. District Court in Manhattan, Steve Biegel said he and other company employees were put in awkward, sexually charged situations by Toyo Shigeta, the chief executive officer of Dentsu Holdings USA.

The company said it would fight the lawsuit, which it described as a disgruntled former employee's attempt to get "money to which he is not entitled."

"When Dentsu refused to yield to Mr. Biegel's unreasonable demands, he made outrageous allegations which the company has refuted," Dentsu said in a statement, adding that Biegel had never complained about the alleged incidents while working for the company.

Biegel said in the suit he was the executive responsible for developing television, radio, print and outdoor advertisements for many of Dentsu's most important clients when he was asked to go on a trip in June 2004 to the Czech Republic where a commercial was shot for Canon Inc.

On one evening during the trip, Shigeta ordered Biegel and another employee of the company to go on an outing with him but refused to say where they were going, the lawsuit said.

Shigeta took them to a brothel, leaving Biegel, who is married, offended and humiliated that he had been forced or duped into going there, the lawsuit said.

It said Shigeta later demanded they participate in prostitution and became angry when they did not, accusing them of being "no fun."

The lawsuit said Shigeta later told them that having sex with prostitutes was a proper style of conducting business and commemorating business dealings.

According to the lawsuit, Biegel was "horrified, offended and humiliated by this sexually debasing experience of being forced to attend a brothel imposed on him as a condition of his employment."

On another business trip to Brazil in April 2004, Biegel witnessed Shigeta repeatedly taking photographs emphasizing the crotches of scantily clad women on the beach until a male companion of one of the women on the beach threatened him, the lawsuit said.

Shigeta demonstrated a similar obsession during a photo shoot for an advertisement for Canon in Key Biscayne, Florida , when he took a picture of tennis star Maria Sharapova on the tennis court and proudly distributed the "crotch shot," the lawsuit said.

As part of the lawsuit, the photograph of Sharapova was attached as an exhibit.

On another business trip to Tokyo in October 2004, Shigeta insisted that Biegel and two other employees accompany him to a Japanese bath house where they were instructed to climb naked into a bath with Shigeta, the lawsuit said.

"Once again, plaintiff was offended and humiliated by this outrageous, sexually degrading experience imposed on him as a condition of his employment," the lawsuit said.

Biegel confronted Shigeta in spring 2006, telling him he almost complained to human resources about the bath house experience; afterward, Shigeta's attitude and demeanor toward Biegel changed completely and he was fired in November 2006, the lawsuit said.