The author of “Harry Potter” J.K.Rowling together with the maker of the film about the small wizard are trying to avert publishing the book version of a Web site about Harry Potter. 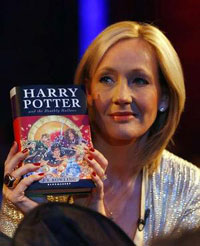 The suit, filed Wednesday by the author and Warner Bros. in federal court in Manhattan, claims that RDR Books of Michigan will infringe on Rowling's intellectual property rights if it goes ahead with its plan to publish the 400-page "Harry Potter Lexicon" on Nov. 28.

According to the publisher, the book contains much of the same material already found on www.hp-lexicon.org, a fan-created collection of essays and encyclopedic material on the Harry Potter universe, including lists of spells and potions found in the books, a catalog of magical creatures, and even a "who's who in the wizarding world."

In the past, Rowling has expressed support for such fan-driven efforts and has singled out the Harry Potter Lexicon Web site and its editor, Steve Vander Ark , for high praise.

But in the lawsuit, Rowling claimed that the print version of the Lexicon would improperly interfere with her plans to write her own definitive Harry Potter encyclopedia, one that would include new material not in the novels.

"I cannot, therefore, approve of 'companion books' or 'encyclopedias' that seek to preempt my definitive Potter reference book for their authors' own personal gain," Rowling said in a news release issued by Warner Bros. The film giant owns all the intellectual property related to the Potters books and movies.

RDR Books Publisher Roger Rapoport said the suit dismayed him but vowed that he would not allow it to block plans to release the Lexicon next month. He described the book as a "critical reference work" and dismissed any notion that it could compete with any official encyclopedia written by Rowling.

Rapoport said Vander Ark was a middle school librarian who started the Web site in his spare time in 2000, then watched its popularity grow to the point where Rowling herself gave it a Fan Site Award in 2004.

"He cannot understand why she wouldn't be supportive now," Rapoport said.

Warner Bros. has involved Vander Ark in its Potter marketing campaigns in the past. An interview with Vander Ark is even slated to be included in the special features section of the next Harry Potter DVD, "Harry Potter and the Order of the Phoenix ."

An e-mail seeking comment that was sent to Vander Ark at an address on the Web site was not immediately returned.

The lawsuit does not seek action against the Web version of the Lexicon, but criticizes it for numerous sections that it said "regurgitate Ms. Rowling's original creative expression with minimal additional commentary."

The seventh and final installment in Harry's adventures, "Harry Potter and the Deathly Hallows," was published in July. The seven books have sold nearly 400 million copies and have been translated into 64 languages