Former Capt. Kirk will not get to boldly go anywhere with his old pal Spock in the new "Star Trek" movie. 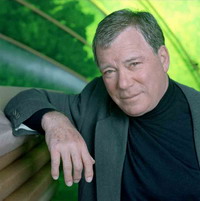 While Leonard Nimoy is reprising his role as the pointy-eared Vulcan in next year's science-fiction flick, William Shatner is not on board as Kirk.

"I couldn't believe it. I'm not in the movie at all. Leonard, God bless his heart, is in, but not me," Shatner, 76, told The Associated Press on Thursday. "I thought, what a decision to make, since it obviously is a decision not to make use of the popularity I have to ensure the movie has good box office. It didn't seem to be a wise business decision."

Director J.J. Abrams announced last summer that Nimoy would reprise the role he originated opposite Shatner in the 1960s television show and played again in six big-screen adventures.

Abrams said Shatner probably would have a part in the film, which is due in theaters in December 2008. But while Shatner said he had a couple of meetings with Abrams, nothing came of it.

Abrams' "Trek" film, whose plot is being kept under wraps by distributor Paramount, recounts an early adventure for the crew of the starship Enterprise, with Chris Pines as the young Kirk and Zachary Quinto as the young Spock.

Past "Trek" films presented an obstacle to the revival of Shatner's Kirk, who died at the end of 1994's "Star Trek: Generations."

But in science fiction, you can never truly say die. Spock was killed off in 1982's "Star Trek: The Wrath of Khan" then resurrected in 1984's "Star Trek: The Search for Spock," with Nimoy's Vulcan living on to co-star in three more films, two episodes of "Star Trek: The Next Generation" and now Abrams' new movie.

"I've got a lot to do," said Shatner, whose current work includes the TV show "Boston Legal," narration for the Christmas spoof "Stalking Santa" due on DVD on Nov. 6, and the prequel "Star Trek: Academy - Collision Course," a novel chronicling Kirk and Spock's first meeting.

Shatner says of "Star Trek": "Having been in on the creation of it, I was hoping to be in on the re-creation."