Carol Burnett celebrated at the premiere of her "American Masters" documentary profile. 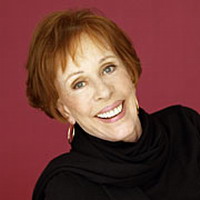 Burnett's career has spanned six decades with work on the stage, in movies and, most notably, TV's "The Carol Burnett Show."

"Burnett Show" co-stars Tim Conway and Harvey Korman were among those who attended a preview screening of "Carol Burnett: A Woman of Character."

When Burnett first heard about plans for the show, "I said, `Are they sure?"' she told AP Television News. "And I thought, `Yeah, I think I would love to do this because it's a great living scrapbook for my kids and my grandkids."'

Others at the screening, held Thursday night at The Paley Center for Media in Beverly Hills, included Phyllis Diller, "Burnett Show" costume designer Bob Mackie and Jon Cryer, who revealed he is Burnett's spiritual love child.

"Carol Burnett and Eddie Murphy were the two most influential performers on my type of humor," Cryer explained. "And that's a big deal, when you realize that your whole idea of what is funny was formed by this one person."

"The Carol Burnett Show," one of the last great variety shows to air on prime-time television, ran from 1967-78. "That show never would have been that successful, if it weren't for (Burnett)," Conway said. "She was a star who let you do things. And most people, if something funny comes up, say, `I'll be doing that.' But she just let us do whatever we wanted."

Burnett, 74, next can be heard in the animated "Horton Hears a Who!" also featuring the voices of Jim Carrey and Steve Carell, due in theaters next year.

"I just went in to have fun," Burnett said of her work ethic. "That's the main thing I wanted to do. That's why we all get into show business in the first place. And then we kind of forget that. And I just said to the crew and the cast when we started, I said, `We're here to have fun. We're not here to prove anything. We're just going to have fun and love each other and have a ball for as long as we can last."'